As an important representative of the Fiber Art movement, Toshiko Horiuchi MacAdam (°1940, Japan) teaches at universities in the United States, Japan, and Canada. The artist published an important book on textile structures From a Line – a handbook on embroidery. She is also the author of a series of in-depth articles on traditional textiles and their creators. In 1990, Toshiko founded Interplay Design and Manufacturing with her husband Charles MacAdam to spread her ‘toy art’ worldwide. The artworks are as strong as they are beautiful, and are created in collaboration with the Japanese top engineer Norihide Imagawa. They can be found in art museums, parks, shopping centers, community centers, and residential areas in Japan, China, Korea, Singapore, India, Dubai, Spain, New Zealand, America, and Canada. Recently, a ‘playscape’ was installed in an orphanage in Najaf, Iraq. Harmonic Motion was originally an assignment for the Museum of Contemporary Art (MACRO) in Rome; after the exhibition in 2015 it travelled to Toledo (Ohio, United States) and to Hong Kong. The artwork, as it can be seen in shopping centre K, has been adapted to make optimal use of the space. 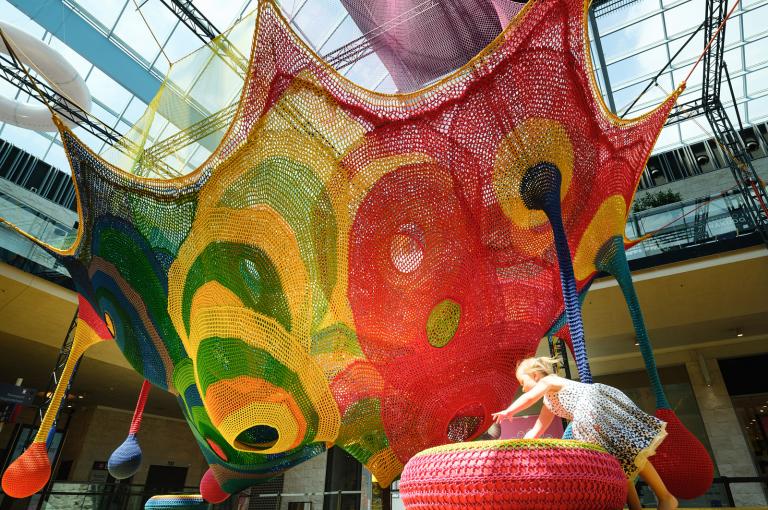